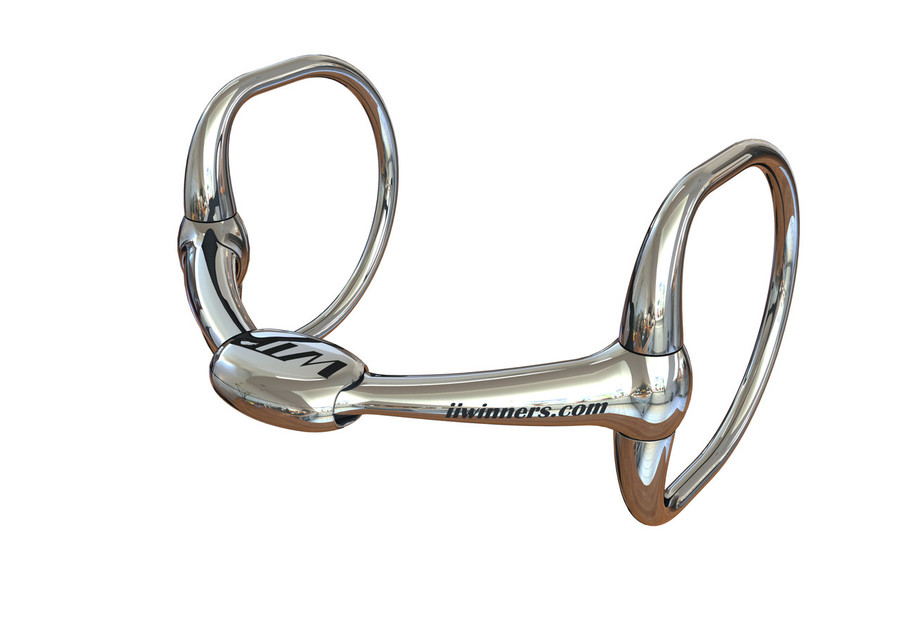 Get your hands on the most talked about and recommended bit in the horse world at the moment, list of benefits include:

* Joint arms cannot hinge downward, preventing pain to the Palate, tongue and bars of the mouth.

* Prevents horse wanting to put its tongue over the bit

* Proven to help with Headshaking, pulling, bolting, leaning, rearing, chewing on the bit and griding teeth

*Only available in normal plate, please contact us if you wish to order the extended plate*

My fussy mouthed mare absolutely loves the stillness of this bit. It’s narrow where it needs to be (across the tongue) and thicker towards to edges of the lips, so it’s nice and gentle. The eggbutt rings really help with turning, and my mare finds it difficult to lean on it. She is so soft riding in this bit. I absolutely love it!! We were in a NS Tactio Turtle, however, in my opinion, this bit is way better - it’s just so still in the mouth. I give the WTP Lightweight Eggbutt 5/5. Thank you

I noticed an immediate difference in my fussy mouthed new horse. Excellent suggestion by Bitbank and a great option for fussy mouthed horses who play with the bit.

I have had ongoing problems with a horse I acquired 15 months ago, being extremely fussy mouthed. She has had issues such as constant nose-rubbing, once bridled, tossing her head incessantly to sneeze, and also wanting to lean heavily on the bridle rather than move laterally from the leg. I have used the WTP Lightweight Eggbutt only 3 times so far, but the mouth behaviours have improved remarkably in this short time. I am quite astonished, actually. .

My boy loves this new bit. No more headshaking!

What a lovely bit, my breaker is relaxed and happy with the WTP lightweight eggbutt bit

4 out of 5 stars only because the rings are huge on these bits. Brilliant functionality in terms of use, but not very tidy to look at on a horse with a smaller muzzle. These bits seem to be a much kinder option than cranking the mouth shut on a young horse that gets it&#039;s tongue over the bit.

My horse was overly chewing on his bit and basically looked uncomfortable! The first time I used the WTP bit, there was a huge difference!!! He has reduced he chewing heaps and looks comfortable and is much more responsive! It is a very good quality bit as well! Definantly recommend!

I&#039;m really happy with the quality and service.

I have a 8 yr old OTTB who is fussy with a bit in his mouth. Throws his head, tounge over the bit or chewing on the bit. I have found that he happily worked with this bit in from the first try (only had it a day and the difference is amazing). He has stopped chewing, tossing his head and generally playing with the bit. In other words he is accepting the contact with a gentleness. Would happily recommend this bit to others to try.

I purchased this bit for a fussy mouthed mare who was unhappy in her Myler level one loose ring, always grinding on the bit and although soft was not confident to work into the contact consistently. Wow, what an instant difference this bit made. No grinding, and very quickly she was working into a confident and steady contact. This bit is very well described on the website and I would highly recommend it.

My mare whom I have owned for 6 years has a sensitive mouth and I have tried several different bits to date. From the very first ride with the WTP bit she was happier (less fussing, head tossing, teeth grinding and tongue lolling out the side of her mouth). I would highly recommend this bit.

I purchased this bit for my very sensitive mouth mare. I have now ridden in it 5-6 times including at competition. My Mare used to chew on the baucher bit i rode in previously, but i haven&#039;t observed her doing this in the WTP bit. I also found i have better control using this bit in the SJ as in the past i felt she was running due to pain. She relaxes during the flatwork too. I will highly reccoment this bit for the sensitive mouth horse.

I have only recently purchased this bit for a TB mare who raced extensively and had her tongue tied. She is normally very fussy in the mouth when you take up a light contact. She can soften and accept the bit but only after she has worked for a while. I found that using this bit she was softer sooner and less fussy right from the start. Hopefully as she gets more confidence with accepting the bit contact she will keep improving. I have only used it a couple of times so far but I am impressed with the result. I have tried several others with varying degrees of success.

I purchased this for a very fussy mouthed TB mare. I do have trouble with her in a normal snaffle with her grinding and locking on to the bit, so following trialling a ROBART and still having pinching issues, I thought I would try this. Its very kind - and yes she is softer in it. I haven&#039;t had her locking down, and the transitions are a lot smoother in this bit. Another issue I do have with her though, is her running away a little (esp in canter), so I would never attempt to jump/event in this bit - but I have noticed at home, that if she wants to be a bit disobedient , she can tend to get very strong in the canter in this bit... I did take her out in it to an open space and couldn&#039;t stop her in a hand gallop for quite a while. It was all a bit embarrassing as I was doing working hunter classes and was JUST OUT OF CONTROL ;-) It will be great for eventing in the dressage ring, but for a strong horse like mine, I need something else to help me slow her down... Just something to keep in mind... Its so soft, its like nothing is there ;-)