The Pelham is one of those “go-to” bits when a rider finds themselves with a bit of a brakes issue. It’s very common, very widely used from ponies to big showjumpers and everything in between.  It is a very effective bit, when fitted and used appropriately, and it can certainly help with brakes.

Here’s a little story I’d like to share with you that I hear often about the Pelham.  A rider comes to me with a question about bitting their horse.  They are currently in a loose ring snaffle, but finding that out XC or showjumping the horse tends to ignore the aids and rush the fences, leading to the rider hanging on for dear life to the reins.  She is fighting a loosing battle, as she is pulling, he is pulling back and she’ll never win that battle.  Her confidence is taking a beating and it’s getting messy.

So, she tries a Pelham, as suggested by her instructor.  Off she goes for a XC round, but she now finds that the horse is behind the leg, jacking up and not going forward.  Next time she loosens the chain right off, and yes he goes forward again, but she has no more control than with the snaffle.  She’s confused and at a loss as to what to try next.

OK, let’s break this down a bit.

The Pelham works on leverage.  This means that the bit is giving the rider a mechanical advantage, making their rein aids 2-3 times stronger than what they feel in their hands.  The idea is to do more with less.  To have a lighter contact, give clear aids, then release.

It is VERY common for riders to get on with a Pelham not quite understanding that the pressure they feel in their hands is threefold for the horse.  So can you see that as our rider got on her horse after being carted around in the snaffle, hanging on for dear life, she rode in the Pelham with that same feel, that same contact, the same pressure on the reins as she had with the snaffle and her horse felt that 3 times stronger?

So, when the horse backed off, jacked up and would not go forward, he was actually giving her the RIGHT RESPONSE.  She wanted him to listen to her rein aids, take a check and slow.  He did that.  Hooray!  Now, the responsibility is with the rider to find the balance between having the right amount of weight in the hands, and the right amount of go from the horse.

Make no mistake- this takes skill and knowledge.  The rider needs to learn to balance not on the reins anymore, but on their own seat.  They need a basic understanding of how leverage works, and that their rein aids are now stronger.

By loosening the chain right off, the rider takes away the mechanical advantage of the way the pelham works.  The shank is allowed to rotate all the way back, instead of to 45degrees to the line of the lips.  All this does, is add 10cm of length to the rider’s reins and does not give any advantage at all.

The Chain on a Pelham MUST be adjusted correctly for the bit to be effective.  It must lie flat in the curb groove (using a lip strap to keep it there if you need) and adjusted to allow the shank to rotate to 45degree to lip line before becoming snug on the jaw.  At this point the bit is at its most effective and useful for the rider.  Any other adjustment of the chain is contrary to the way it was designed. 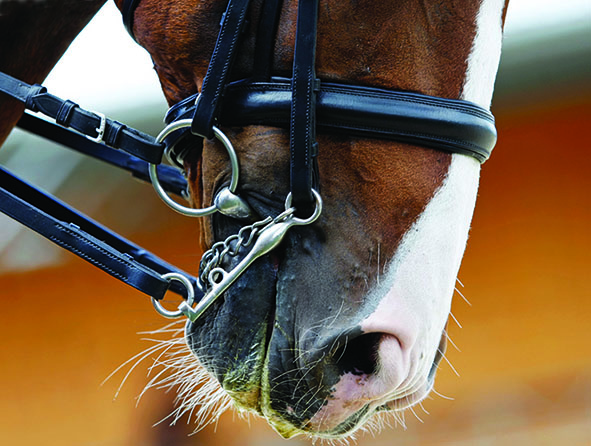 This is a weymouth, not a pelham but clearly shows the correct 45degree angle for the adjustment of the curb chain- look at the angle from the shank to the lip line.

So when you swap from a snaffle to a Pelham (or any stronger bit) and find your horse backing off or jacking up- celebrate!  He’s giving you the response you were looking for in the search for more brakes.  It’s now up to you to learn the skills to find that balance of stop-go.