When we know better, we do better. There is such a heavily publicised focus on animal welfare and wellbeing at present (particularly in dressage) and we all want our horses to be as comfortable and happy as possible so we don't inadvertently end up in the spotlight. We love our horses more than anything, we would never knowingly cause harm or discomfort - quite the opposite, often going to extreme lengths to ensure their quality of life is the best it can be.

We no longer watch black and white TV? We no longer use a crank phone (theres a flashback!) or watch VHS, so why do we keep going in the same old bits? Many people will argue "if ain't broke, don't try and fix it" but here is something to ponder - horses are incredibly stoic animals born to please and will often cope through pain without much fuss - leading us to think our current bit is ok. Advances in bitting research and technology shows us that many of these traditional bits do cause issues in the equine mouth and this can be avoided with the right bit.

I have put together 5 older style bits that I believe we can permanently retire to the bit wall - and of course - their 21st Century kinder alternatives.

This single jointed little snaffle with short cheeks is unfortunately very popular in pony club. Used commonly on kids ponies to stop the bit sliding through the mouth and help little riders have more control.

Why i'd like to see it go - This bit squeezes the horses inner cheeks straight into his molars due to its amplified nutcracker action and short curved cheekpieces - often causing head shaking, pulling and reefing.

A kinder alternative - The Neue Schule Pony Full cheek - Featuring the lovely NS Tranz Angled Lozenge mouthpiece, with oval shaped arms which give a wide weight bearing surface, but take up less height under the palate. resulting in a much more consistent contact and response from the horse.

Another single jointed bit commonly used in racing or for horses that don't salivate much in a standard bit. often used for horses that lean on one side as the roller prevents them from being able to hang on it.

Why i'd like to see it go -  There is so much going on with this bit, the way the rollers are stacked onto the bit cannon leaves a lot of ability to pinch the tongue and become rough over time. The single join combined with the dee acts as a fulcrum on the lower jaw and traps the tongue between the bit arms.

A kinder alternative - Myler MB02 Level 1 Dee Ring - The fixed cheeks of the Dee ring offer the bit more stability, the dee sides can also assist the rider with clear direct turning aids, while preventing the bit from sliding through the mouth. Features the Myler pressure-release so when the horse relaxes in the poll, the bit pressure is instantly released resulting in a lovely self carriage. The Myler also feature independant side movement also makes it easy to unlock resistance or hanging on the one rein. The Myler bits all feature a series of copper inlays to encourage salivation. 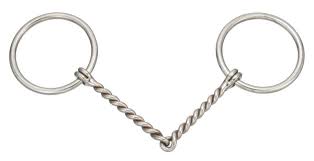 More common in the 'western' disciplines but also used in english - the wire used is incredibly thin and is twisted to create a spiral effect and used feel more response in a dull or hard in the mouth. Comes in a variety of forms, french link, roller, single jointed, W mouth etc. Usually used to sharpen up strong horses who are described as hard in the mouth.

Why I'd like to see it go - There are thin bits, and then there is the twisted wire. Out of 10 or so snaffles that I have measured the thickest one was a mere 6mm thick. As a very respected horseman friend once described to me "Sharp enough to cut through a block of cheese, imagine what it does to his mouth!". In addition to being super sharp the texture caused by the twist is vey abrasive. The roller version is used for horses who get their tongue over the bit.

A kinder alternative - Bombers McHardy Snaffle. The McHardy is often used for a dull mouthed horse or a horse shaking its head when bit pressure is applied. The McHardy will relieve tongue pressure and as it has a medium port creating space for the tongue relieving pressure. The Buster Roller in the middle will activate the tongue and will "wake up" a dull mouth and result in a more refined communication with your horse. The increased bar pressure will give you a much sharper and quicker response from your horse without offending. 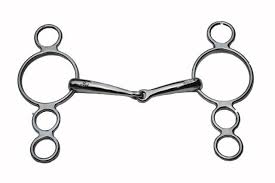 Why I'd like to see it go - The perfectly flat, straight leverage arms of the dutch gag use an immense amount of pressure on the sides of the horses face, not only digging into the face and squashing the cheeks into the teeth but often tilting forwards and forcing the bridle cheekpiece up the horses face into the sensitive eye area. Combined with a single jointed mouthpiece it will also use an immense amount of lower jaw pressure - which is why many horses placed in a dutch gag will end up behind the vertical or very heavily down on the forehand and running through the bit or head tossing before a fence.

A kinder alternative - The Neue Schule Tranz Angled Universal. This bit is highly effective for those riders needing a little help in faster work or stride control before a fence. Eliminates the head toss when asking for the downward transition, eg. when shortening before a fence. If you are looking to upgrade from a snaffle, this is highly recommended as it has a very mild, kind, even pressure mouthpiece. The universal rings are curved to be swept away from the face meaning no digging in or pushing the cheeks into the teeth. Your horse will be much more comfortable and as a result will be more responsive to your aids as this bit is not offensive at all - even for the very sensitive horse.

Common in racing and in the horse breaking/starting world. Used to stop horses getting their tongue over the bit.

Why I'd like to see it go - In this day and age of advancements in bitting technology we know more about the equine mouth than ever - and I am going to say it straight out - tongue suppression bits and devices are not necessary. They are a band-aid for a training issue or lack of knowledge. They are uncomfortable and inhibit the horses ability to swallow and breathe nasally. See a more in-depth post about that topic here.

A kinder alternative - The Neue Schule Verbindend. The Verbindend doesn't use any downward pressure on the tongue and lays perfectly in the mouth due to its sympathetic ergonomic design. Once we remove the tongue pressure caused by most single and double jointed bits the horses tongue is free to move, the jaw becomes relaxed and the tongue evasion is solved. Its a copper alloy called Salox Gold so it warms up very quickly to body temperature, encourages salivation with its sweet taste and encourages a much quicker bit acceptance.

Are you using any of the above bits? Need help selecting or not sure how your current bit works in the mouth? Got a bit thats not listed here and want a kinder option?

Contact us now and we can guide you through the maze. We are Australia's most experienced and trusted bit experts and we have helped thousands of riders just like you!

I love helping you and your horses, i hope you have found this article useful!