Often a rider will remark to us that they want to put their horse into a double for the first time, and that they want to use a 5cm shank.  I usually ask them why they particularly want the smaller, 5cm shank over the standard 7cm shank. The response is that it is "kinder".

Here's the reason why- the weymouth bit works on leverage.  The basic principle of this is that with the length of the shank, their is an increase in pressure at the pivot point.  On your weymouth, the pivot point is the mouthpiece.  So while you feel say 1kg of weight in the hand, the horse feels 2, 3 or even 4 times that, depending on the length of the shank.  The LONGER the shank, the more force can be applied overall.  The SHORTER the shank, the less leverage forces can be applied by the rider.

That means, that with the shorter 5cm shank there is less pressure able to applied overall.  However, with the shorter shank, the rider needs to move their hands less to get the same result with a longer shank.  (there's a bit of physics here, but go with me!) 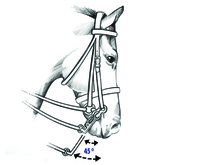 The Illustration above shows how with a longer shank, you have to move your hands (rotate the bit) more, to achieve the same result.  (Illustration by Michael Speechly)

The 5cm short shank bit may be able to apply less pressure than the standard 7cm shank, but the action is quicker and sharper.

In the same way that the 9cm shank can apply MORE pressure overall than the standard 7cm shank, but being the longer shank you need to move you hands more to get the same result as the 7cm shank.

The 7cm shank is considered "standard" for a reason.  It is a nice midway between being forgiving enough in terms of allowing for the movement in the hands, and effective use of pressure.  Dressage legal shanks can be anywhere between 5cm to 10cm in length, and the shank is always measured from the mouthpiece down, not the whole side of the bit from upper purchase to the lower ring.